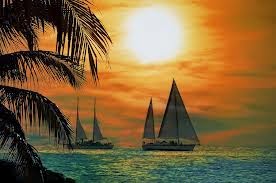 Shipping. No, I'm not talking boats or cross-continental oceanic mishaps. Tall sails. Or threading the Panama Canal in an over-sized vessel. (Measure before you go, people. Measure.)

Recently, I had the significant pleasure of traveling to Florida and visiting with my 14 year old niece. While galavanting about one afternoon she mentioned she loved "shipping" a girl and a guy. A couple. Books, TV, movies. She had to hold the couple near and dear to her heart and be strongly invested in their experience and outcome as a couple to care enough to ship them.

I pretended to understand what she was talking about when in my mind I was lost worse than a cat in a bag caught in a storm, in the middle of the Atlantic ocean. While faking understanding, I simultaneously logged into my brain, "shipping, shipping, shipping?" Did she just say some slang variant shit? (A reality her mother would be mortified to accept.)

After further numerous empty-headed moments, and serious raucous debate in my head, I realized that a) the clouds would either fall from the sky before I'd figure out this terminology's interpretation on my own. Or b) I could ask my niece point-blank what the heck she meant. I picked the latter. Happily, she's a talker and loves explaining herself.

SHIPPING: Not to be confused with wave runners or canoes, sailboats or power boats, pontoon or paddle. (And no, you're not headed to the post office, UPS or Fed Ex, either.) The term, when falling from a teenager's mouth, references two ships passing in the night. A boy and a girl who either like or can't stand each other, being forced together for whatever reason. He and she inch closer by circumstance, situation or experience, and uncontrollably fall in like or love with one another. (Rick Riordan is apparently a genius at this! Namely in his Percy Jackson series.)

That's the general gist of it. Good to know romance is still alive, although I'm still slightly confused as to how everybody gets turned into boats.

So if you're feeling outwitted, outnumbered or just plain atrociously ill-informed (like me), yet are still brave enough to walk where teenagers hover, swirl or pounce in packs, take heart, you now know something that should give you an in. Say it boldly, say it with confidence. (Never let them see you sweat.) I'm shipping so and so this weekend...how about you? The teen in your life may think you're crazy but you'll be killing it with the cool factor.
Posted by Tiffany at 2:21 PM